Today marks an interesting day in the history of cryptocurrency. It is the day on which the Bitcoin network split from Bitcoin Cash, and both networks never had to overlap again. A lot has changed since, but the big development is BCH trading at under 1% of Bitcoin’s value, and for a good reason.

It is commendable to see the Bitcoin Cash network stick around for five years. That is much longer than people initially expected it to. Unfortunately, the network never lived up to expectations and continues to lose ground in core metrics. As a fork of Bitcoin, Bitcoin Cash is unlikely to ever succeed in posing a threat to the world’s leading cryptocurrency, let alone surpass it.

The networks of Bitcoin and Bitcoin Cash split on August 1, 2017, at network block #478559. The reason for this split was the activation of Segregated Witness – and the Lightning Network – on Bitcoin. Moreover, Bitcoin users aimed to keep network blocks small in size, whereas others wanted bigger blocks to support more transactions. With the support of Bitmain and other parties, the goal was to fork Bitcoin to 8MB blocks on a different chain.

From that date forward, Bitcoin Cash became an altcoin of which there are a dime a dozen. Although it offered bigger network blocks and lower transaction fees, it was never appealing to miners and ultimately started fading into obscurity. The network still exists today, though, as BCH trades at $138. Unfortunately, that is under 1% of the Bitcoin value, further confirming how this network has lost all initial momentum. Moreover, it has not seen its all-time high of $3,785 since December 20, 2017, and is unlikely to return to such a value.

With such a low price, one has to wonder if Bitcoin Cash was a worthwhile venture. It is essential for people to pursue new ideas they think will work, but claiming BCH “is the new BTC” was designed to fail from day one. The community and market have spoken in the past five years and relegated Bitcoin Cash to the lower market cap rankings most people won’t even scroll down to. Moreover, several of its network statistics indicate things will not necessarily improve soon.

As Bitcoin Cash relies on Proof-of-Work like Bitcoin, it needs miner support to secure the network. Whereas Bitcoin has over 99% of the combined hashrate – of BTC, BCH, BSV, and XEC – Bitcoin Cash represents 0.57%. That percentage is in line with the value of Bitcoin one BCH has, confirming some overlap between the two. Moreover, it represents 1.35% of the overall transactions and 0.16% of the block sizes. Bitcoin SV , forked from Bitcoin Cash, beats its “parent” hands down in those two segments. 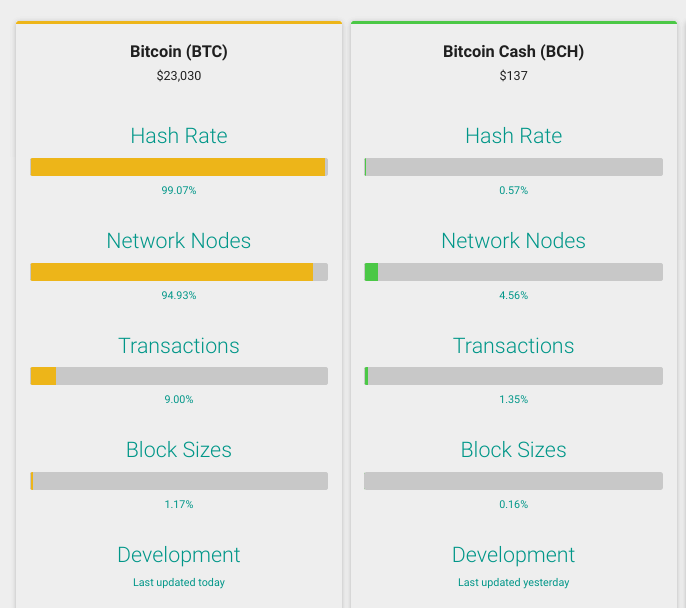 Considering Bitcoin Cash was designed to have bigger blocks, one would expect to see very big blocks hit the network. Interestingly, virtually all blocks are smaller than Bitcoin’s size. There is no need for bigger blocks if there aren’t any transactions to fill them with. Even if BTC is over 1200x more expensive for transactions, there isn’t much interest in using BCH. That is worrisome, although both eCash and Bitcoin SV are even cheaper to use than Bitcoin Cash.

None of the information on this website is investment or financial advice and does not necessarily reflect the views of CryptoMode or the author. CryptoMode is not responsible for any financial losses sustained by acting on information provided on this website by its authors or clients. Always conduct your research before making financial commitments, especially with third-party reviews, presales, and other opportunities.