With the dramatic implosion of the blockchain ecosystem, it’s time to seriously reconsider the framework of cryptos. No, I’m not suggesting that investors forever abandon ship on digital assets. Clearly, the concept of decentralized trading resonates with millions of young investors. However, we may be due for an extended winter, meaning that participants must think strategically rather than tactically. Therefore, investors should keep a list of cryptos to watch like this one.

Obviously, the biggest concern for cryptos is the bankruptcy of FTX, a popular virtual currency exchange. With founder Sam Bankman-Fried facing investigations from both the Justice Department and the Securities and Exchange Commission (SEC), circumstances don’t look good for the blockchain ecosystem. As well, the holes in FTX’s financials reveal worrying dynamics that may long impact the major virtual currencies.

However, investors should also realize that the Federal Reserve ultimately represents the arbiter of crypto trajectories. Indeed, my research demonstrates that the money stock and the benchmark digital asset pricing share a strong correlation. Essentially, as the money supply tightens, cryptos face significant pressure due to their pure risk-on nature.

Therefore, those looking for bargains should wait. If you think you’re seeing a great deal now, you’ll probably get a better one next year. These are the cryptos to watch for when that time comes.

Currently, all eyes are on Bitcoin (BTC-USD) as it probably holds the key for where other cryptos will head next. For several months, BTC meandered around the psychologically important $20,000 level. However, the FTX bankruptcy and its associated ills resulted in the benchmark digital asset tumbling below 16K at one point. At the present juncture, BTC trades hands for $16,945 but its posture looks weak.

Now, if you peruse social media, you’re going to find a plethora of opinions. However, per a CoinDesk report, the experts at Morgan Stanley believe that BTC’s next support lines lie between $12,500 to $13,500. That’s because 18K represented a critical support line. Having dropped decisively below this threshold, the bears essentially smell blood in the water.

Personally, I’m anticipating at least $10,000 BTC as the logical threshold. I’m not going to tell anyone what to do with their money. However, I will say that I’m not interested in touching BTC until it drops to 10K. With the Fed being the arbiter of Bitcoin’s trajectory, the central bank’s current hawkish stance warrants discretion over valor.

As with other cryptos, Ethereum (ETH-USD) suffered significantly amid the wake of the FTX bankruptcy. Against the wee hours of Nov. 15, ETH gave up nearly 15% of market value in the trailing week. For comparison’s sake, Bitcoin suffered almost identical losses. With both retail and institutional investors likely losing confidence in the space, it’s best to be prudent toward Ethereum.

Worryingly, Ethereum got caught up in another scandal, whereby a popular exchange accidentally transferred more than 300,000 ETH (worth $360 million) off its exchange. For many, the message resonates loud and clear: stay away from custodial exchanges and wallet services. Of course, it’s practically inevitable that the chaos urges another message.

Stay away from cryptos altogether.

Now, I wouldn’t go to that extreme. However, it’s probably not ideal to wager on ETH at this very moment. Currently, the coin trades hands at $1,264. I would be very surprised if, in a few months’ time, ETH is still trading in four-digit territory. Frankly, investors need to worry about the $750 level.

Under a bullish cycle that we saw during 2021, stablecoins like Tether (USDT-USD) make plenty of sense. Though mainstream institutions gradually warmed to cryptos recently, it still takes time to convert fiat dollars to virtual currencies. By already having a portion of your wealth in stablecoins, investors and particularly traders can advantage of blockchain-based opportunities immediately.

However, those opportunities — at least for long-side investors — diminished rapidly with the erosion of cryptos. Because of the sector’s present deflationary cycle, jumping onboard a coin or token will probably lead to losses down the line. In other words, there’s no hurry during crypto deflation. As I said earlier, the virtual currency winter dictates that we think strategically rather than tactically.

While I’m not going to outright say that everyone should convert their Tethers back to fiat dollars, here’s the deal: you should at least consider reducing your exposure. Honestly, why expose yourself to such severe risk when the payoff will likely be more red ink on your portfolio? 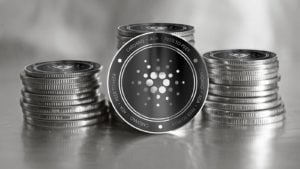 Recently, I came across an interesting story regarding Cardano (ADA-USD), an innovative blockchain project that essentially pioneered the concept of proof of stake. Based on blockchain activity analytics, a report suggests that the whales — or the alpha dogs of the crypto space — took an interest in ADA. Specifically, a 400% rise in new Cardano wallet addresses materialized since the FTX crisis.

On paper, this dynamic suggests that Cardano might rise above the muck. To be fair, ADA has been one of the least-impacted cryptos among the majors. Still, we’re talking about a drop in the trailing week of 12% as opposed to 14% or 15%. It’s not exactly riveting stuff.

Of course, ADA proponents will point out the underlying innovation of the Cardano project. Nevertheless, it’s important to remember that innovation never saved Ethereum from its recent disaster. Instead, I would toss out the fundamental arguments and look at the market.

Obviously, sentiment remains poor in the sector, meaning it’s doubtful that a smaller outfit like Cardano can move against the grain.

Whether you believe in Solana (SOL-USD) or not as a potential Ethereum killer, investors need to pay close attention to its recent implosion. As you may know, Solana initially garnered popularity because it represented a quicker, cheaper and more secure version of Ethereum. With the ETH network ringing up onerous transaction fees, Solana offered a much more viable solution for blockchain developers.

Despite the clear fundamental advantages, SOL represented one of the worst losers among major cryptos recently. In the trailing week, SOL lost a staggering 48% of its market value. Unfortunately, Solana had too much of a close tie with Sam Bankman-Fried, who was a strong supporter of SOL. However, with the FTX implosion, investors quickly soured on any associations with the enterprise.

Put another way, Solana’s developers may not have put a foot wrong fundamentally. It really could be the best Ethereum alternative. Unfortunately, the market will do what it will do. Not realizing this awful capriciousness of cryptos can potentially lead you into making truly terrible decisions.

While outside the realm of the most popular cryptos, Avalanche (AVAX-USD) was unfortunately not able to fly under the radar. Over the trailing week, AVAX dropped nearly 20% of market value, one of the worst performances among digital assets ranked in the top 20 by market capitalization. Like other blockchain projects, Avalanche currently provides a lesson in the differences between fundamental implications and market realities.

On the surface level, investors might reason that Avalanche should outperform other cryptos. A recent report noted that development activity for the AVAX network increased conspicuously. While this framework suggests that engagement for the blockchain is up, it did not translate to upside momentum. If anything, AVAX suffered disproportionately relative to other cryptos.

Unfortunately, this circumstance dictates that you’re better off relying on technical analysis or some other sentiment gauge other than fundamental blockchain analytics. It’s just a harsh reality: probably most investors of cryptos don’t care about the fundamentals, thus explaining the dissonance.

Although one of the riskiest ideas among cryptos, what appealed to me on some level regarding Shiba Inu (SHIB-USD) is the lack of pretentiousness. Unlike other ultra-ambitious blockchain projects, Shiba Inu didn’t set off to eradicate global hunger. Nor did it attempt to frame microtransactions as a means to correct wealth disparities. From what I can see, the SHIB community focuses on having fun and perhaps making money along the way.

Honestly, this approach may be the best for the blockchain. I mean, look at Sam Bankman-Fried. Portrayed as some sort of savior of cryptos, he had Bill Clinton, Tom Brady, Katy Perry and other well-known public figures appear with him at various visionary conferences. Yet for all that pomp and circumstance, FTX appears to have been nothing more than a high-level scam.

Still, even with Shiba Inu’s lack of pretentiousness, it did not save SHIB from market erosion. Over the trailing week, SHIB lost around 16% of its value. Therefore, crypto participants must be brutally realistic about this sector. The market will do what the market will do, irrespective of how you dress up this pig.

On the date of publication, Josh Enomoto held a LONG position in BTC, ETH, USDT and ADA. The opinions expressed in this article are those of the writer, subject to the InvestorPlace.com Publishing Guidelines.

A former senior business analyst for Sony Electronics, Josh Enomoto has helped broker major contracts with Fortune Global 500 companies. Over the past several years, he has delivered unique, critical insights for the investment markets, as well as various other industries including legal, construction management, and healthcare.