Elon Musk’s Tesla released its Q4 2022 financial report and revealed that the electric car company did not conduct any Bitcoin transactions. Tesla took an impairment of $34 million and currently holds about 9,720 BTC and the average purchase cost per Bitcoin is about $32,099.

Also read: How China could legalize crypto in its efforts to tax cryptocurrency firms and individuals

Elon Musk’s Tesla holds on to its $245.5 million worth of Bitcoin, exits liquidity trap

Tesla, Elon Musk’s electric car company did not sell its Bitcoin holdings in Q4 2022. The firm escaped the exit liquidity trap that plagued BTC holders since the asset climbed above $23,000.

In the Bitcoin price rally that started in January 2023, BTC surprised many investors. However, alongside higher prices there has been a spike in motivation for holders and miners to take exit liquidity after the prolonged bear market of 2022.

New investors and miners on the Bitcoin network have been motivated to spend and take the opportunity to exit and secure profit. There is a spike in resilience for long-term holders.

When the market is in a prolonged bottom (or top) discovery stage, new investor behavior becomes an influential factor in forming local recovery (or correction) pivot points. This behavior can be assessed using the Percentage of Short-Term Holder Supply in Profit metric by crypto intelligence tracker Glassnode.

During bear markets, when more than 97.5% of the acquired supply by new investors is in loss the chance of seller exhaustion rises exponentially. Conversely, when upwards of 97.5% of short-term holder supply is in profit, these players tend to seize the opportunity and exit at break-even or profit. 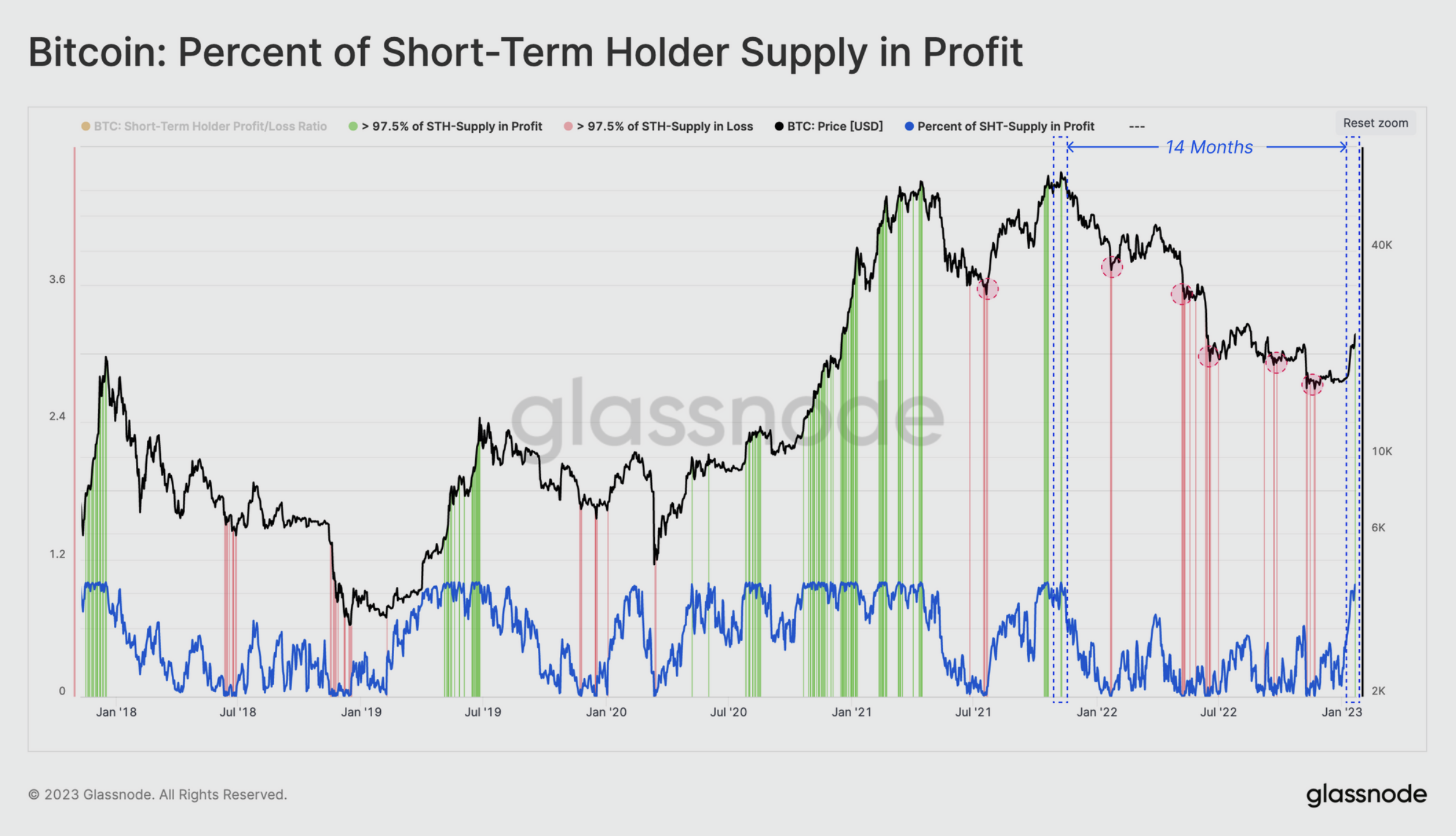 Bitcoin’s price rally to $23,000 has pushed this metric to “> 97.5% in profit” for the first time since the asset hit its all-time high in November 2021. Given this substantial spike in profitability, the probability of sell pressure sourced from short term holders is expected to grow.

Tesla’s average cost per Bitcoin stands at $32,099, therefore the firm is likely to profit from shedding BTC holdings once the asset crosses the $32,000 mark. Tesla is unlikely to sell BTC before it crosses the key $32,000 level as this would imply that the electric car company book losses.

Tesla’s break-even for Bitcoin holdings is therefore $32,099. Experts on crypto Twitter interpret the firm’s decision to hold on to BTC as a commitment to embracing Bitcoin and cryptocurrencies.